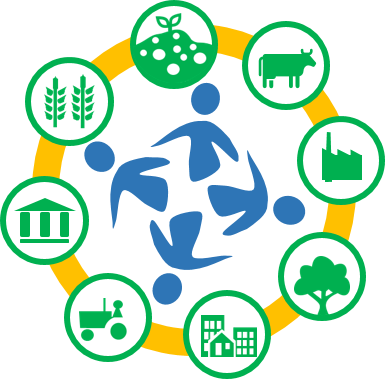 REFOOTURE project in Ethiopia has targeted South Achefer and Yeki woredas in the Amhara and South-Western Ethiopia Regions to facilitate stakeholder collaboration for strengthening synergy and alignment among actors, and sustainable livelihood improvement of smallholder farmers. The project nurtures the roles of different stakeholders as thinkers, enablers, and doers in innovation co-creation using a living lab as a platform to orchestrate and form an ecosystem of actors for agricultural sector transformation. Among the various goals of the project are the co-designing of products and services to feed into the regenerative inclusive food system through an iterative process, with key stakeholders in a public-private-people partnership and through farmers to farmers interaction in a real-life setting.

The REFOOTURE project Ethiopia has established two living labs in South Achefer and Tepi to spearhead the innovation dynamics in two scenarios. The South Achefer living lab has been established to learn about the potato, Rhodes grass, and dairy innovation dynamic path followed after two years of the CASCAPE project was phased out. The living lab examines which of the three models happening (1) the induced model, in which innovation derives from the business opportunities created by market niches and opportunities; (2) the extended pipeline model, in which the government or public institutions shepherd an innovation from research-extension through to implementation; and (3) the producers-led model, in which innovation is derived from improvements in production processes. The Tepi living lab on the other hand is established as a fresh to support regenerative inclusive food system transformation focusing on spices innovation. The Ethiopian living labs have a woreda level structure supported by an ad hoc think-tank structure at regional and national levels.

A cross-country visit was organized in Ethiopia for Kenya and Uganda REFOOTURE teams as well as a project team leader from WUR from May 2 to 9, 2022 to facilitate learning and experience sharing on the regenerative inclusive food system and living lab. The visit covers South Achefer and Tepi living labs. South Achefer woreda was formerly one of the project sites of the Capacity building for scaling-up of evidence-based best practices in agricultural production in Ethiopia (CASCAPE) project, which mainly focuses on testing and validation of innovation to scale up best practices to improve agricultural production and productivity. The introduction of the high yielder potato variety has a game-changer effect in the area. The on-farm productivity averaged 35 tons/ha which have been translated into food security, income, and asset building. However, farmers made a complaint that the replacement of maize with potato affects the livestock feed and alternative solutions should be sought. This led to the introduction of Rhodes grass and the continued income flow from potatoes has supported the investment of crossbreed Holstein Friesian dairy cows. The three innovations not only transformed farmers’ livelihoods but also enhance circular and regenerative agriculture and beyond. The story which follows illustrates the transformation of Abichikli village in south Achefer woreda.

Transformation of a village

Game changer innovations have a far-reaching impact on adopter farmers’ livelihood and create a real-life field school for other farmers to learn from. The lead farmers who are the first to try the innovations have played an instrumental role in demonstrating the applicability and feasibility of innovations and setting the scene for others to follow. Following the phase outing of the CASCAPE project, the south Achefer living lab is a medium to establish an agenda of development in villages and beyond through the interaction of various stakeholders composed of thinkers, enablers, and doers. The living lab platform is guiding villagers and key stakeholders to identify key bottlenecks, identify leverage points for interventions, and ensure inclusive development.

A visit was organized to South Achefer woreda in a village called Abichikli and the team have the privilege to visit Mr. Teshome Melesse, Alefe Mekete, and Tadesse Melesse who are lead farmers and adopted the Belete potato variety before others. These farmers were growing maize before the introduction of potatoes. Maize is a heavy nutrient feeder and productive staple food crop. The Stover is used to feed animals and for fire. The low market prices, as well as other secondary factors, such as high water and fertilizer requirements, several pests, or limited nutrition supplies, have made this crop less attractive for most farmers. According to these farmers shifting to potato production is lucrative as it is more productive and they get more marketable surplus to generate income. Replacing maize with potatoes resulted in a shortage of animal feeds. Rhodes grass which is a useful forage for pasture and hay, relatively drought-resistant and very productive, of high quality is promoted to overcome the feed problem. The surplus income from potatoes and the availability of Rhodes grass for animal feed induce investment in dairy cattle. Potato innovation is a game-changer in South Achefer where it impacts farmers’ livelihood positively and invigorated the adoption of a range of innovations. A circular and regenerative agriculture model is emerging as farmers use animal dung inputs to make compost, heap, and vermicompost techniques are widely practiced in combination with synthetic fertilizers to feed their crops, feed is produced for animals, and farmers generate adequate income to finance agricultural investments and develop the capacity to adopt other innovations such as dairy cattle, poultry, borehole water, animal housing, diffused light store, feed storage and soft skills such as building a rapport for better collaboration and synergy among villagers to establish milk marketing and processing cooperatives. Reducing the leakage and minimum wastage in the system is evident as farmers implement farming with low inputs by using resources such as heap compost and vermicompost, soil and water conservations structure, and stall feeding to avoid overgrazing and waste recycling including household refuse and poultry poop and others.

The lead farmers who hosted the cross-country visit have adopted over 15 innovations related to potato innovation, dairy, soil fertility management, forage development, feed preservation, and collective marketing of potato seed tuber and milk. Mr. Teshome one of the lead farmers demands more innovations such as chopper, a fresh supply of clean potato seed tuber to avoid degeneration and loss of productive vigor and technology to reduce animal feed costs. He emphasized he is capable of financing the cost of innovation supply as far as the innovation is feasible and applicable to his farming context. This confidence of Mr. Teshome is rarely the case in smallholder farmers as most of them are dependent on government transfers and loans to finance such investments. Alefe Mekete, and Tadesse Melesse are also on the same level when it comes to the adoption of innovation and benefiting from their investment in their farming. While the Abichikli village is awakened for transformation there are a lot of farmers still struggling to meet ends. The lead farmers confess that they don’t want to be better off as an island in the sea of poverty. He gives himself to transform the whole village. He meticulously describes inclusive development as the future of Abichkli village.  He also sees a lot of promise in the living lab to achieve his dream and further transform the village.

The South Achefer innovation dynamics has shown a combination of the induced, extended pipe line and farmers led models. The business opportunities created by market niches and emerging private processors and petty traders for potato and milk have justified the induced innovation dynamics model while the research and extension institutions through the institutional push model steer an innovation dynamic where a continued supply of innovation enabled farmers to uptake technologies to address emerging challenges. The farmers-led model, in which innovation is derived from improvements in production processes through user co-creation has been widespread as the lead farmers engaged in co-creation and adapting innovation to their contexts.

The discussion of the cross-country visit participants with living lab members has revealed the plan of South Achefer living as a showcase in building consensus on a common development goal for the entire village including the strengthening of emerging small private businesses such as agro-dealers, processors, and retailers. The living lab is laying a plan to assist villagers to achieve the following deliverables among the many the platform has set:

We use cookies on our website to give you the most relevant experience by remembering your preferences and repeat visits. By clicking “Accept All”, you consent to the use of ALL the cookies. However, you may visit "Cookie Settings" to provide a controlled consent.
Cookie SettingsAccept All
Manage consent

This website uses cookies to improve your experience while you navigate through the website. Out of these, the cookies that are categorized as necessary are stored on your browser as they are essential for the working of basic functionalities of the website. We also use third-party cookies that help us analyze and understand how you use this website. These cookies will be stored in your browser only with your consent. You also have the option to opt-out of these cookies. But opting out of some of these cookies may affect your browsing experience.
Necessary Always Enabled
Necessary cookies are absolutely essential for the website to function properly. These cookies ensure basic functionalities and security features of the website, anonymously.
Functional
Functional cookies help to perform certain functionalities like sharing the content of the website on social media platforms, collect feedbacks, and other third-party features.
Performance
Performance cookies are used to understand and analyze the key performance indexes of the website which helps in delivering a better user experience for the visitors.
Analytics
Analytical cookies are used to understand how visitors interact with the website. These cookies help provide information on metrics the number of visitors, bounce rate, traffic source, etc.
Advertisement
Advertisement cookies are used to provide visitors with relevant ads and marketing campaigns. These cookies track visitors across websites and collect information to provide customized ads.
Others
Other uncategorized cookies are those that are being analyzed and have not been classified into a category as yet.
SAVE & ACCEPT